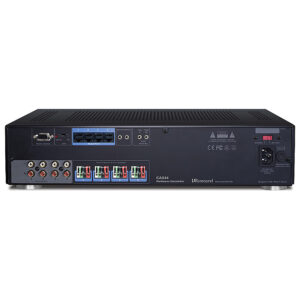 The Russound CAS44 Multi-room audio system lets you listen to your favourite tunes all over your house.

The Russound CAS44 Multizone Controller Amplifier system lets you listen to your favorite tunes all over your house. Use this controller/amplifier to create a CAS44 system or to expand your current system into as many as four additional listening rooms. Add compatible Russound keypads in each of your listening areas to select your music source, control playback, and adjust the volume. The keypads connect to the controller/amplifier via CAT-5 cable.

The CAS44 is a multi-room control and amplifier central unit. The CAS44 is compatible with the KPL remote keypads with LCD display, the KP4 remote keypads, and the CAS-RC learning and pre-programmed wireless remote.