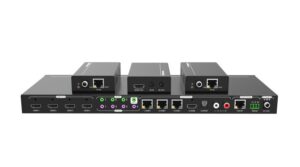 The TPHD-BYE-R is an HDBaseT Receiver that consists of the following inputs and outputs, 1 HDBaseT IN, 1 IR IN, 1 IR OUT and HDMI OUT. The receiver is powered directly by the Matrix Switcher.